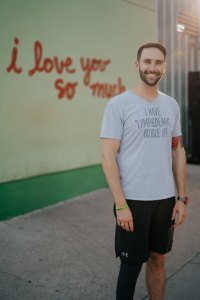 Cam Ayala, 33 years old, is a primary lymphedema patient, living in Houston, Texas. Cam was in his early youth (11 years old) and noticed something was wrong as he was playing little league basketball. His parents took him to an orthopedic doctor to make sure everything was OK. During the initial imaging, they determined that Cam‘s right leg was about an inch and a half shorter than his left and it appeared that he may have had some cancer spotting on his right knee. To rule this out an orthopedic surgeon performed a bone biopsy on his right leg. Two weeks after that surgery, Cam‘s leg began to swell uncontrollably. After about a year of visiting dozens of specialists at the Texas Medical Center, Cam was finally diagnosed with primary lymphedema.

Desperate to prove his coaches and his doctors wrong, Cam persevered against the odds and was the first man in NCAA basketball history to play with primary lymphedema. Cam‘s health took a turn for the worse after he graduated from Texas A&M University in 2014. Cam underwent seven separate episodes of major infection in his right leg, osteomyelitis, which has resulted in 16 surgeries leading up to a total knee replacement he just had a few months ago.

Cam first became a public figure after his appearance on ABC’s “The Bachelorette” and “Bachelor in Paradise” in 2019. When the show decided to edited out his discussions and representation of Lymphedema on all of the episodes, Cam decided that he was going to use his platform to bring awareness to this lifelong condition and fight for other people who are battling this disease.

After working for a leading pneumatic compression device company in Houston for the last two and a half years, Cam has just recently begun a new role as the “Director of Development” for the global nonprofit, Lymphatic Education & Research Network (LE&RN).

Cam also enjoys spreading the word on social media with Lymphedema patients (especially the under-represented male patient population as they bring to light the unique challenges of being young men with lymphedema… which inspired them to form “The Lymphie Fellas”).

Cam’s words of wisdom for anyone who is battling Lymphedema:

“It is so important to hold firm in your Faith in God; because he will give you the strength even when you feel weak. With Lymphedema good days and bad days are inevitable. When you have those difficult moments, trusting in God will give you the courage and peace to not let your Lymphedema win.”

There’s an incredible online Lymphedema Community that will take you in with open hearts and open arms. Cam can be reached via his Instagram @camronayala or Facebook for any additional questions or connections.

Become a Supporting M​ember and join the fight against lymphedema (LE) and lymphatic diseases (LD)!